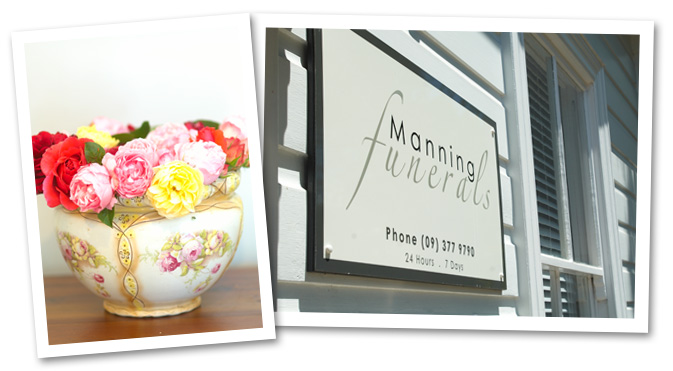 The formation of Manning Funerals was borne out of a desire by Martha-Louise Asmus to create a different type of funeral home – one not run on the omnipresent corporate funeral home style of today, but one where families received individualized care at a realistic price, making them feel they were the only family being cared for.

“I wanted families to have continuity...It would be me who families saw right through the process... I would give them as much time as they required without the worry of rushing out the door to other funerals”.

After twelve years of working for large funeral homes doing up to 1,000 funerals a year, where at times people felt they were on a conveyor belt, she felt it was time to take the daunting step of opening her own business.

“I wanted families to have continuity – something not always possible in large firms where they may see a number of different funeral directors. It would be me who families saw right through the process – from the time of transferring the deceased from the place of death, to sitting down and making arrangements, conducting viewings and then being there for them on the day of the funeral to walk them through this stage. I also wanted families to know that there were no time constraints – I would give them as much time as they required without the worry of rushing out the door to other funerals”.

Manning Funerals opened the doors of its delightful villa opposite the Auckland Domain on Monday, November 3rd 2008. Visitors to the funeral home are amazed at the homely and welcoming ambience that prevails at 31 George Street, Newmarket. Large comfortable couches, polished floors, 100 year old Kauri pews and fresh flowers give the impression of entering someone’s private home, rather than an austere funeral home.

Manning Funerals prides itself on the high and personable standard of care offered to families – something reflected in the Testimonials section. “It is a humbling experience to be chosen by a family to care for their loved one and we at Manning Funerals greatly appreciate it when families place their trust in us. Our approach clearly shows families we care for people as though they were our own family”.