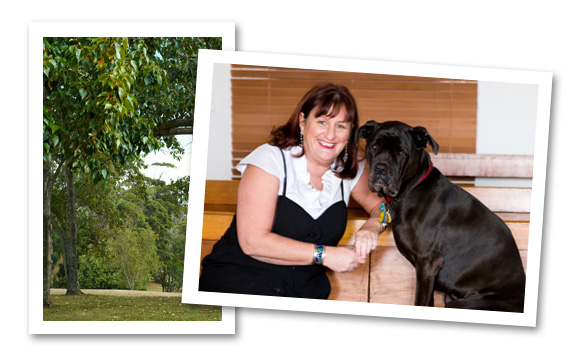 Martha-Louise has had a variety of personal experiences with death which have played a significant part in leading to her becoming a funeral director.

“So many times I can be sitting with a family and one moment they are sobbing and the next moment there is raucous laughter as a member of the family recalls an incident or particular foible of the deceased, that has long since been forgotten”.

Martha-Louise’s mother died when she was just eight years old, and she remembers the years prior to this dealing with her mother’s terminal illness. Unfortunately cancer, predominantly breast cancer, has been prevalent in Martha-Louise’s family. This has paved a preparatory path for her now working with other families at their time of need. Uniquely, Martha-Louise is able to bring a child’s perspective, as well as an adult’s, to her role.

Along with her own family experiences, her best friend, Sue, died in 1997 and  Martha-Louise credits her death with being the catalyst to becoming a funeral director. After researching funeral homes for Sue’s family, she met a woman funeral director who made Martha-Louise think “this is something I would love to do”. When she returned to work to tell a colleague she had found her chosen career, his response was, “you can’t, you’re not serious enough!”. “I knew then, it was not about being sombre and serious, but rather, what mattered was being respectful, empathetic, understanding and working with a sense of dignity. And it was OK to have a sense of humour! “So many times I can be sitting with a family and one moment they are sobbing and the next moment there is raucous laughter as a member of the family recalls an incident or particular foible of the deceased, that has long since been forgotten”. This is one of the many privileged moments of being a funeral director.

Martha-Louise cites many aspects of her personality that separate her from many funeral directors.

Having faced death on a personal level through so many of her own family members gives her an understanding and insight into knowing what a grieved person is feeling. Women through an innate maternal instinct often allow themselves to get closer to families, but also know intuitively what is appropriate and what is not.

Martha-Louise has not always been a funeral director and has seen much of life through travelling and varied occupations. She considers this an advantage over those who have only known life as a funeral director as she can see things from different perspectives. During her OE (some years ago!) she spent five years travelling through Scandinavia, Russia, Europe, the Middle East, UK and the United States, including a two year stint on a kibbutz in Israel working in the “Raffat” milking cows. Over the past twelve years in Auckland, she has avidly followed her passion of travelling, visiting South Africa, China, Zion, Bryce and the Grand Canyon national parks in the US, San Francisco, Israel, Egypt, the Czech Republic, Hungary, Slovakia, along with walking the Milford Track, the Greenstone and Routeburn Tracks and the Queen Charlotte. Her wish list includes walking the Inca Trail, visiting Macchu Piccu and many other South American areas, the Galapagos Islands, Antarctica, Canada, Alaska and the Arctic Circle.  She hopes she doesn’t run out of time before completing her bucket list!

Her working life has also been varied – five years with the Police as a civilian working in administration and also in the Operations Room (her first night in the Operations Room was the night of the Erebus Disaster); working on covert drug operations with the Police; clerical and administration duties at a hospital social work department and an alcohol and drug  counseling centre; five years at a regional centre of a large bank; temping duties in London; working for a colliery owned by the NZ Dairy Group; a medical insurance role; and milking cows both at the Massey University twin herd and in Kibbutz Ginnegar, Israel for two years. Her jobs have usually been people focused, and have enabled Martha-Louise to think outside of the “funeral” box. It’s important for a funeral director to be able to place themselves in the family’s shoes, and see how they would react.   Martha-Louise has an open and honest approach to people and quickly puts people at ease - no matter what social strata they move in, religious belief they follow or ethnic group they belong to.

Travelling has been a fantastic opportunity for Martha-Louise to be exposed to the vibrancy of so many different cultures, religions and races. In addition to her travelling, she has worked closely with many ethnic groups in the Auckland area – Pacific Island, Jewish, Buddhist, Hindu and Christian, to name but a few. Martha-Louise sees her role as a funeral director as being one who facilitates the family’s wishes – there is no room for funeral directors to be judgmental or intolerant of another religion, culture or social status, but rather, to work with families to ensure their individual needs are met.

Martha-Louise recalls that when she first began funeral directing, she was instructed by the archetypal, Dickensonian character who was training her that the first thing she must do upon meeting a family is say “I am very sorry to hear about your loss”. To his chagrin, her immediate response was “I will never say that. If I can’t convey empathy by my personality and care for the family and deceased, then I will not waste my time with meaningless platitudes”. Not surprisingly, this wasn’t well received!

Martha-Louise has carried this philosophy through her funeral career, and her openness, humour and care for families is greatly appreciated by all those who come into contact with her.

Some years ago, Martha-Louise was taking a deceased home to his family and was accompanied in the hearse by the man’s grandson. The young child, about eight or nine, asked Martha-Louise  “aren’t you scared driving around with all these dead bodies in your car”. Martha-Louise flashed her warm smile and said “it’s not the dead you have to worry about, it’s the living!”

When Martha-Louise is not working or pursuing her passion of travel, she is most likely to be found in her garden, indulging in “dirt therapy”; spending time with her beloved animals (most of whom who have been rescued and feature below); reading; swimming; walking; or enjoying the company of family and friends.